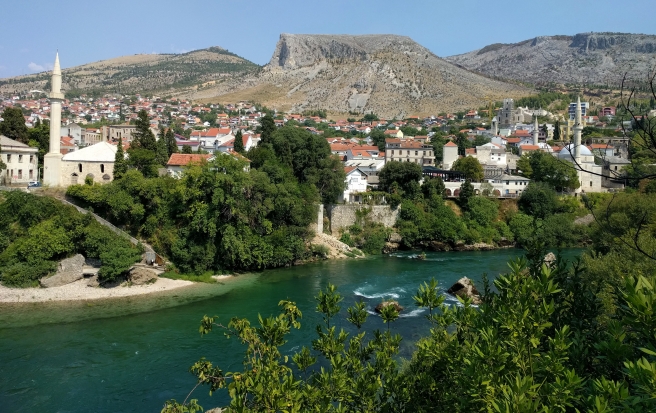 I was sitting in a café overlooking the Neretva river and the famous Ottoman Mostar bridge, waiting for the jumper to stop strutting around and actually jump! He is not fearful, he stands on the rim of the 78 foot bridge waiting for the precise amount of money to fall into his fez before he takes his impressive leap. It is most likely not his first jump of the day. From the café, I could see his sun-kissed body pacing back and forth as his audience continued to grow. Below, fellow dive club members lazily waited in the little boat to rescue him if it should go wrong. But this guy is a “pro.” He knows how to tuck his legs swan like when he leaps, heading knee first into the water before suddenly swinging his legs around as he enters the freezing water below. The sound of him hitting the water is louder than you would think for the tiny splash he makes. This daredevil stunt looks (and is) dangerous. The water is only 15 feet deep at this spot, if you hit it wrong you would really be in trouble. While the stunt has become a way to hustle tourists for money and to impress them with their athletic dives, bridge jumping from Stari Most, is a 450 year old tradition. Tourists are allowed to do it too, if they partake of the diver’s training school. I wished I were brave enough to try, yet somehow I found myself still firmly in my seat drinking my Bosnian coffee, a thick muddy rich brew to be drunk at any time of the day, for any reason. Coffee is a way of life here. It is a process to make, and a ritual to drink.

Stari Most was originally built by the Ottomans in 1566, and was the widest arch in the world at the time. It is 13 feet wide and nearly 100 feet long. It slopes gently upward until it meets the other side in a pinnacle at the top. I imagine the smooth white stone is treacherous when wet; thankfully, I only had to contend with it dry, and still my feet slipped. The bridge is connected on each side to stone square shaped guard towers which hover over the glacial teal river. The bridge leads you neatly over the fast flowing river and directly to the old town bazaar and mosques. The view is stunning from any of the myriad cafes on either side of the river. Hercegovina is a Mediterranean climate, and as such, the sun, at all times of the day, blurs angles into one in its intense glare. The only thing that keeps the purity of its color in Mostar’s midday is the brilliantly green river, sparkling like a jewel as it passes through the scorched white stone buildings and the hills behind them. And maybe the jumper’s ruby red speedo too! He’s still up there performing.

I have seen no architecture that is more pleasing to me than the Mediterranean-Ottoman style. Made up of implacable stone, or whitewashed wood, the houses are box-like with a straight arrangement of windows, often gently arched, or with decorative shutters. It is comforting to look at, maybe it’s the symmetry, or the softness of the angles, or the way they match the countryside around them. Mostar’s 36 mosques are perfection. Unadorned stonework with delicate minarets pointing skyward, the call to prayer resonating from them five times a day is enough to make the cats sunning themselves on the blazing cobblestones and the ducks in the river look toward Mecca. I find it centering and beautiful. I may not have the proper religious devotion, but I admire its consistency and regularity. I know it’s coming. I know they studied hard to get the plaintive call just so. I know it comes from a fervency of spirt that I don’t have. I got caught up in how much it fits this setting, this city. It is a primal call to prayer for Muslims, and for me a reminder of how blessed we all are to be here.

It is a reminder of the uneasy peace that has settled over BiH since the end of the war. How necessary religious freedom is for a society to function. I mean real religious freedom, not the freedom to force your religion onto someone else. Across from the Muslim side, Roman Catholic church bells ring out, and a giant cross monument tops a hill above the city. People live separately, but there are projects under way by UNESCO to educate and bring people together. And anyone can dive. 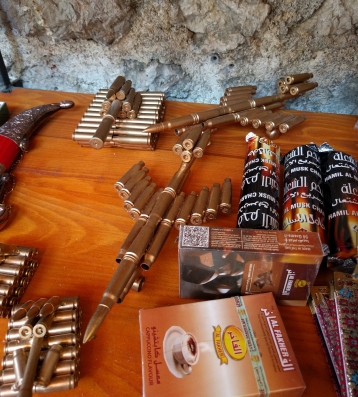 The war is evident in ways beyond the segregated living (by choice, not law). I have seen people with missing legs. I have seen ruined buildings, and buildings still standing and even used, but riddled with pockmarks. I have read how UNESCO, and Luxembourg and the World Bank (and probably many others) painstakingly rebuilt Stari Most, her guard towers, and the old town. It had been cruelly destroyed in an effort to force the Bosniaks into an enclave and to demoralize everyone. It was painful for Bosniaks and Croats to see their beloved bridge decimated. However, today the bazaar is active, and the bridge has resumed its duty as symbol of Mostar. After all, “Mostar” means “bridge keeper.” I have seen toys and souvenirs made from bullet casings, and all kinds of war medals and pins for sale. The capitalization of war makes me immensely uncomfortable (I once saw a Pol Pot Khmer Rouge t-shirt in a pile of clothes I was sorting for charity). Even as my soul shudders, my intellect understands it. People here are very poor. 20 years after the war, BiH is still one of the poorest nations in Europe, with a very high unemployment rate. Tourists buy it, so they sell it. I can’t imagine what it feels like to sell cheap tchotchkes made from something that brought so much devastation upon their nation, their families, and personhood. But they are resilient people who are taking advantage of what they can to improve their prospects.

I learned a personal lesson from this. I still can’t figure out how I let it happen, but I completely dropped my guard. I was trying to get to the bridge early, hoping the sun wouldn’t be glaring down on the bridge (it was) so I could get a good picture. It was 8:30 in the morning and people were already crowding around the bridge and old town. I passed a man wearing a city guide nametag and he told me I could get a cheap tour with him. For some inexplicable reason, I went with him. I did. We walked to a couple of spots where he pointed to a mosque, and a small stone bridge that resembles Stari Most in miniature. He told me some interesting things about the city and the war, and he told me that he has children. When we came to our “last stop,” he held out his hand and said, “I want 100 marks.” A darkening descended around me that was almost cartoonish. It felt like an atmospheric change and I desperately wanted to put my face in my hands and either cry or laugh hysterically. I couldn’t believe this was happening to me! That I for absolutely no reason walked into this situation! I wasn’t even as mad at him as I should have been. I decided to placate him and gave him the damn marks. Then he said, “I want 50 more for tip.” When I started to shake my head no, his voice took on a desperate edge as he almost whined, “It’s for my children! There’s nothing after tourist season ends, nothing!” I tried to give him a 20 but then his voice hardened and turned flat. He wanted that 50. So I gave it to him. He then tried to get another 50 and despite the fear that was starting to grip me, I finally stood up for myself and said that I really couldn’t. I also needed money while here. I have never felt more stupid or more like a fraud in my life. He then kissed me three times on the cheek, pointed me to a restaurant that is open for breakfast and stalked off. I went to a different restaurant and ate my breakfast like a zombie. What if I had stood up for myself in the first place? What if he had been violent instead? How did I do this to myself? And the most unsettling part is that he was probably using truth to manipulate me. He probably really does have children. When the bulk of the tourists leave (which is soon), they probably really do have a hard time until the next season. I told myself he’d better use the money for good and that if I see him in town with a coffee or cigarette I would go kick him in the shins.

Was it stupidity or compassion that made me fall for the oldest tourist scam in the world? I had been thinking and feeling empathy for so long and so intensely about what everyone had been through. Now I felt shaken, like I had lost my credentials for solo travel. It’s embarrassing to write this, but I think it’s important for travelers to confess their vulnerabilities and mistakes too, so others can learn from them, and because it is part of traveling. I can’t be the only somewhat seasoned traveler to do something stupid like this.

Later that day I was watching and waiting for the man to jump. I was waiting for my food to arrive when a lovely family came in. One of the ladies turned to me and asked if I had a phone charger, I told her I didn’t. That my phone was dying too. She laughed a deep laugh and her eyes sparkled kindly. She told me that she is visiting home and that she comes as often as she can, though she lives in the U.S. After a few minutes of talking our food arrived and we focused on ourselves. We looked up at the bridge at the same time to finally see the man make his leap, and we laughed as the woman’s grandson clapped in delight and shouted “whee!” Then, as I was getting ready to leave, she came over to me with a tiny package, and said, “I want to make a gift to you from my country. So you’ll always have my country with you.” Inside was a small copper bracelet and ring, with a delicate floral design.

I marveled at how in one day I met two people who represented their country so fully, in completely different ways. The desperation of daily reality on the one hand, and the generosity of spirit on the other. These qualities go hand in hand all over the world, but are manifest in Bosnia & Hercegovina.