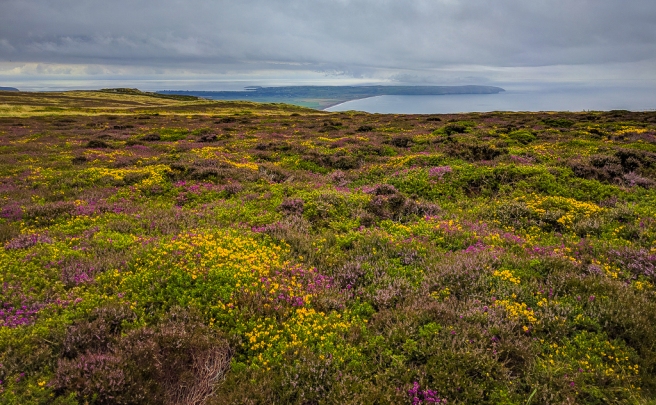 Celebrating the wedding of strangers in a barn, or cowshed as they call it, in Northern windswept Wales qualifies as a surreal experience. The intensely green hills are bejeweled with deep purple heather and bright mustard yellow gorse. Farmland dappled with sheep and cows extends from the hills right up against the cliffs, where they are forced to stop so they don’t fall into the sometimes indigo, sometimes gray, sea. The sun forces its way through the piling gray clouds, throwing spectacular shadows, and highlighting or darkening regions on a whim, or as if it can’t muster the strength to enlighten everything at once. This subtle, quiet landscape gives the illusion of seclusion, as if there is nothing else. It has produced people who are filled with kindness, stoicism and a marvelous sense of humor and distinctive full-throated laughs.

North Wales is like an island within an island, it is quite different than even other parts of Wales, let alone the rest of the U.K. Their primary language is Welsh. This is profound considering the English did their best to eradicate this original British language, along with their counterparts, the Irish and Scottish languages. Cornish has all but vanished. Many Southern Welsh do not speak Welsh at all, though it has been experiencing a revival. But in North Wales they speak Welsh as they always have because it is their language. I was moved by this because I have been in too many countries where language suppression was used to oppress entire populations. Stripping someone of their language and their religion disconnects them from their roots and makes them easier to control. And because of this some languages are irreparably lost, one of the greatest human tragedies. So much experience, perspective and wisdom is lost when a language dies.

However, our visit to North Wales was about happiness and love, not oppression. My friend Kathy invited me to visit her Welsh family with her. Her mother was Welsh and had immigrated to the States after the War. Now Kathy was back to honor her cousins and to visit her mother’s grave and homeland. We were picked up from the train station by the grandparents of the bride, whom Kathy had never met before. We were taken to their house to wait until we could be moved to the farm run by the parents of the bride where we were spending our first night. The hospitality of the Welsh is overwhelming. We ate so much food for “lunch” that two and a half hours later I could only eat five bites of the gargantuan slice of lasagna we were served for dinner. Thankfully Kathy’s cousins understood that it was Welsh people who had picked us up from the train station, so therefore they were not offended when she and I both just could not eat again.
Lunch:

This was just the start of nearly a week of constant eating. Breakfasts consisted of lots of eggs and bacon and bread. Dinners overflowed our plates. The wedding feast beat them all.
Wedding lunch:

Then, as if anyone could possibly be hungry later, there were two full pigs on a spit to make roast pork sandwiches. Needless to say, Kathy and I didn’t touch it, but they were demolished. I guess we’re amateurs.

I was nervous about attending a wedding of absolute strangers, but everyone welcomed me as if I too were part of the family. My contribution to the ceremony was helping to pick heather on the moor near the farm. The purple flowers are so vibrant and they spread so abundantly that it looks like someone stained the hilltops with spilled paint. I suspect they can be seen from space. It was thrilling to dodge the prickly spiky gorse to collect these lovely little flowers for a young bride. I have always read about the “heather on the Moors,” (thank you Brontës, more on them in a different post) and now I got to see their lonely majesty for myself.

The ceremony was in a tiny stone chapel built at the turn of the last century, in the middle of nowhere. Amazingly, it is an active church and people from the invisible, but apparently nearby villages do attend regularly. The service was held in Welsh, but you didn’t need to understand the words to see the commitment that this couple was making to each other. It was interesting because they had their marriage certificate signed during the service, which makes sense, you’re not really married (civilly) until that is taken care of. The couple seemed modest or shy because there was no “kiss the bride” moment, which is usually anticipated in an American wedding. Apparently it is in a Welsh wedding too! But everyone should marry the way they feel the most comfortable. It was a sweet ceremony filled with lovely songs, some with old familiar hymn melodies, and an audience that seemed very content to be there. The wind and rain gods were friendly and allowed the sun prominence for most of the day, and for most of the reception, though the mist eventually conquered. It doesn’t make the landscape any less beautiful. 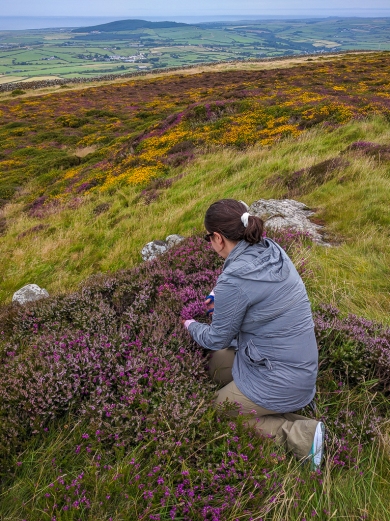 What I admired most about this wedding was how it was so family oriented and very do-it-yourself. We picked flowers for the flower lady, the family veiled the barn with lovely sheer fabrics, the centerpieces were simple wood cuts with vases, and each person had a charming wood nameplate with our names inscribed on them. The church programs were homemade, and their simplicity was charming and elegant. But mostly, it was the way the whole family came together to make the preparations for the cowshed, the church and the making up of the bridesmaids. I’m sure it was stressful, all weddings are to some degree, but it didn’t feel like there was much strain. All in all, it was a very special experience. It was also neat to hear of how the couple are going to continue their family’s way of life and be farmers themselves.

The other ritual I partook in was somber, but just as beautiful. Kathy’s mother passed away on a family visit to Wales when she was only ten. Kathy and my mom were lifelong best friends, knowing each other from the age of 6, until my mom passed three years ago. The day after the wedding, Kathy’s second cousin by marriage drove us to the small quaint cemetery where her mom is buried. Her cousin Eleanor found the grave site immediately and we all set to pulling up the grass and moss and weeds that had covered up the pretty white stones that decorated it. Kathy focused on cleaning off the headstone, revealing the epitaph and the floral design on the sides.
As I weeded, trying to be careful with the bugs I was displacing, a quietness settled on all of us. We just worked. While we were beautifying this sad place, I felt again the powerful injustice of losing a mother when young. I was 29, she was 10, I felt cheated, yet I had my mom for so much longer. I began to feel transient, I felt like my mom was working through me to help her best friend clean up her mother’s resting place. I had become empty of myself and a vessel for my mother, I felt her love, her encouragement flowing through me, and it made me speechless. I am not good at quieting my ego, but at this time I was quiet. It felt like my mom’s rightful place to be with Kathy, and so she was there. I am sure this can be written off as over sentimentality about how I don’t have a grave to clean in dedication for my mom. But I prefer not to analyze it, and let the miracle remain. 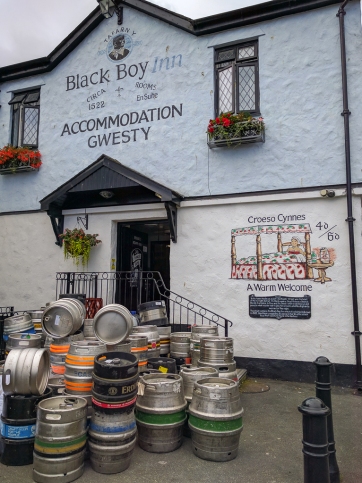 Afterward, we made our way to Caernarfon where we gawked at the massive 13th century castle built by Edward I of England, to, you guessed it, oppress the Britons. We ate, again you guessed it, a humongous lunch at the popular Black Boy inn, while speculating on what the terrible name could mean, and how it can only be named so due to its 16th century origin. Life had returned to normal, and soon after we resumed our trip around the UK.

One thought on “North Wales – An Illusion of Seclusion”